I'm skipping my weekly resolution update because, well, frankly, I went off the wagon hard last week. Many of you know I've been involved in a pretty massive project at the hospital I work at. We're in the process of replacing the paper chart with an electronic medical record (EMR). It's called the iCare project, so please don't sue us Steve Jobs. At 2:00 am, this past Tuesday morning, we went live with our first phase. Gone is the paper Medical Administration Record (MAR) and in is the eMAR. We also consolidated the vast majority of our results (radiology, EKG, lab, etc) into the EMR. This required a team that didn't exist eighteen months ago to be assembled and work together. It took pharmacists to build the new pharmacy system. It took server guys to build new servers. It took nurses to put together the workflows necessary to work in an electronic world. It took application people to build all of the orders and results and physician and nurses in the system. It took Health Information Management people to make sure the electronic chart contained all the legal documents the paper chart had. It took me and two other interface programmers to take information out of over half a dozen separate computer systems and pass that data back and forth. In the grand scheme of things, it was a fairly small go live, but for a facility our size, with our resources, it was a major achievement. And, more or less, it went off without blowing up.

This past week required long hours by everyone on the iCare team. I worked all kinds of crazy shifts (midnights for two nights, days for three days, including Saturday.) And I got off pretty easy. Most people on the team put in 12 hour days. I've got friends pulling their 7th straight twelve hour day (or night) as I sit at home and blog this.

For someone who's generally an unemotional crank, I'm amazed and proud of what we've accomplished in roughly eighteen months, and damnit, I'm going to take some electrons and wax emotional for a spell.

A little over eighteen months ago, my boss was bald. He was a tool, but he had done my job and knew exactly what I did. I was a team of one. I worked in a room with all guys and some of my best friends. We were all very technical minded. My director was a guy. He'd been my director since I started in I.S.

Twleve months ago, my boss was a woman. She knew more about the applications that sent me data than anyone I'd worked with before. I was a team of three. One of the three didn't even touch an interface engine before she started. I had moved out of the room with my friends into a room with (gasp!) men and women. Many of whom were not technical. Many of whom were (shudder) clinical. There were three directors, two of whom didn't work at our hospital previously. One of whom wasn't even involved in I.S. prior to this job.

Twelve months ago, I hardly knew two of my favorite people on the iCare team. They were known as "the hot nurse" and the "Dan Riemer look-a-like." (Sorry, guys :) ) Now, my days are a lot less eventful if one of them is out.

We've lost some along the way. I lost a "pseudo-wife", a good boss and a director. But we've gained a lot of new faces as well. And a lot of those new faces bring a lot of fresh perspectives to a guy who's been in the same department for 8 years and same hospital for 12 years. The room I moved out of a year ago is in disarray. The room that I moved into, well, it's still a dysfunctional family, but there's an energy that's good to be around. It's been an up and down roller-coaster for a year and a half, but we made it to the (first) finish line and I'm proud of what we've accomplished so far.

Now, enough of being sappy. Time to put on my big-boy pants and get back to work. We've only got twelve months before our next go-live, and that one's even bigger that what we just pulled off.
Posted by Mike Rhoads at 8:43 AM No comments:

Looking at this chart, I've decided that weekends are not good for my diet. Every weekend has seen a halt to the steady decline in weight I'm able to maintain during the week. I am glad I've built up a little cushion on this goal though. I'm working 3rd shift next week in support of a go-live at work, and I fully expect my diet to consist mainly of soda and White Castle's. I'm fully expecting to have a weight pop up above the trend line sometime in the next two weeks. 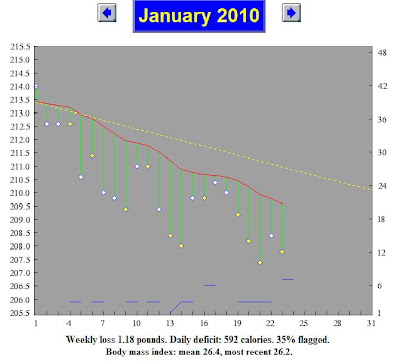 I'm pretty happy with where I landed on this goal this week. After a wardrobe mishap during last weekend's long run left me staring longingly at my youngest daughter's diaper cream, I was forced to take two days off running. I had intended to run back-to-back-to-back-to-back 3 mile runs. In hindsight, that would have been way ambitious. On Friday morning, after running three days straight, my legs hurt like they haven't hurt on the day after a run since back in October. Not that I'm complaining. I'm sick and like that hurt. I got a seven mile run under my belt today, and think I feel pretty good. I'm hoping to shoot for eight next weekend. 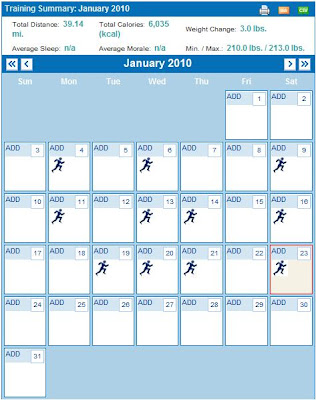 Do the Hundred Pushup Challenge
Still haven't started on this one. It will be at least February until I start on this one.
Posted by Mike Rhoads at 6:06 PM No comments:

I know it's a character flaw, but I can hold a grudge for a long, long time. How long? Well, I've never gotten over the football Cardinals abandoning St. Louis. In 1987. That's right 23 years ago.

That being said, I was having a crappy day yesterday. I don't know if it's this time of year or what, but I was really down. Until the football Cardinals were knocked out of the playoffs.

I know Kurt Warner is some kind of St. Louis legend. I know what he did with the Rams while he was in St. Louis. I also know he now plays for the Cardinals, and man do I hold a grudge. I watched the following clip on my DVR at least 10 times, laughing maniacally every time. I hadn't laughed that much since I found out a former boss was getting a divorce. (Another grudge for another post.)

Now, before you judge me too harshly, Kurt's fine. He played in the second half. And he lost. Decisively. No matter what else happens in the football post season, I'll be happy.
Posted by Mike Rhoads at 9:34 AM No comments:

I'm still doing really well on this goal. I a little over a pound this week, which is still ahead of my goal for the year. I'm really looking forward to hitting 200lbs. At this rate, I should hit that sometime around my birthday. 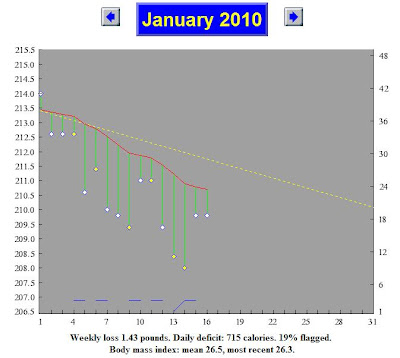 There's a mixed bag on this resolution, again. I intended to run 3 miles a day, Monday through Thursday, then six miles on Saturday. Instead, I did 3 on Monday and Thursday. I made a valiant effort to run on Wednesday, when I really didn't feel like it. I made myself do a mile and re-evaluated how I felt. It was pretty crummy. It was colder than I thought and I was beat from an Abigail not sleeping. On the plus side, I did run 6 miles today. (Or 10K, God Bless the metric system. That sounds so much more impressive.) That's a distance record for me, and I'm pumped about it. That's just shy of half the half marathon distance. This just might be possible. 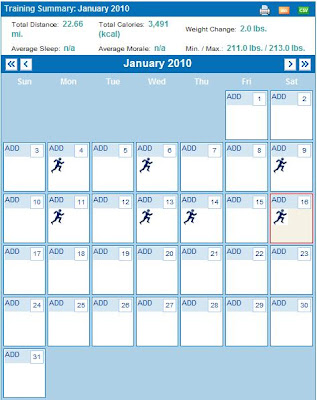 Do the Hundred Pushup Challenge
Still haven't started on this one. It will be at least February until I start on this one.
Posted by Mike Rhoads at 8:23 AM No comments:

I'd like to try to get in the habit of updating my progress on my resolutions on a weekly basis. For those of you keeping score at home, my resolutions for this year are:

I'm actually doing fairly well on this. I'm using the hacker's diet log to track my progress. Really, the only thing I've done this week is cut down on soda and vitamin water, and did a better job of bringing my lunch to work. The yellow dashed line is the track I need to stay on to lose 40 lbs by the beginning of next year. As you can see, I'm off to a strong start: 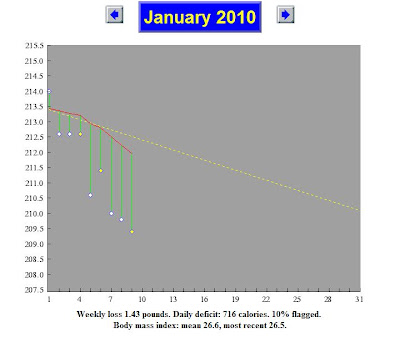 Well, I signed up for it. That's about as far as I've gotten in progressing towards this goal this week. Some health issues kept me from running much the first few days of the month, and then the bitter, bitter cold set in. How cold? Well, on my Monday run, it was so cold, the hard drive in my iPod froze. We're talking 12 degrees on my Monday run, a balmy 19 degrees on my Wednesday run and a big goose egg on today's run. That's without the windchill. Brrr! I was going to break down and do a treadmill run on Friday, but my running friend stood me up (damn insomnia) so I opted for a freezing run outside today instead. The cold weather has limited me to 3 mile runs, so it's mainly been maintenance. There was snow on the ground today. That was hard to run in. Like sand, only without the warm weather and the ocean waves crashing in the background.

It takes a lot of clothes to stay warm on a 0 degree run. This is from today's run ONLY: 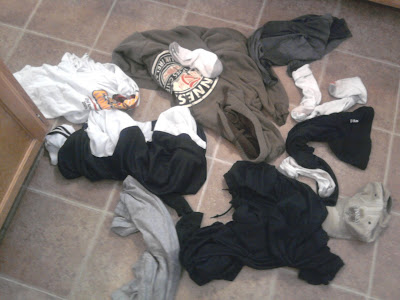 Anyway, here's the calendar for the month so far: 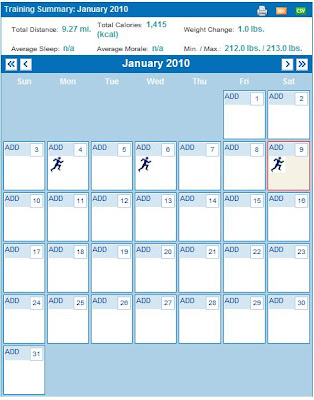 Do the Hundred Pushup Challenge

This will be by far my hardest resolution. I'm really not looking forward to starting this one, and haven't started on it yet. It will probably be a couple of weeks yet before I get the nerve to start this one.

So, all in all, I've only made progress on one of my goals. Not a strong start to the year, but I've got some time to catch up.
Posted by Mike Rhoads at 6:42 AM No comments:

On New Year's Eve, I signed up for the St. Louis Half Marathon. The race takes place April 11th. If my math is right (and it most likely isn't) I have exactly 100 days to prep for this race. The farthest I've run to date is 5 miles. I had planned a six miler sometime this weekend, but I'm still fighting a head cold and extreme cold. If I get to just over 6.5 miles, I'll be halfway there. I'm honestly terrified that I won't be able to prepare in that short of time. Just looking at the course scares the crap out of me: 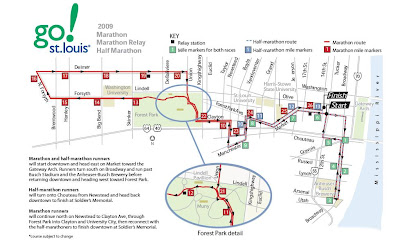 I can't say I have any time goals for this race. I just want to run the whole thing.
Posted by Mike Rhoads at 10:12 AM No comments: